What Is an Ecodesign Stove?

Lately, you might have heard a lot about Ecodesign stoves.  The word ‘eco’ must mean they’re good for the environment, but what exactly is the difference?

All fires give off carbon emissions into the atmosphere that have adverse affects on both our heath and the environment.  The more efficient the fire is, the less emissions it releases.  Open fires, for example, do not have sufficient airflow or distribution of heat.  The heat that emits from an open fire will rise up and flow out of your chimney.  In some cases, open fires will even draw cool air in from the outdoors and create negative energy.

Ecodesign is the Future of Stoves 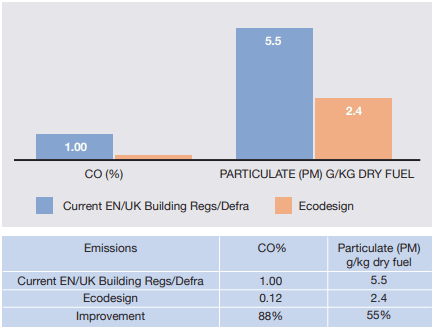 The Sustainable Energy Authority of Ireland (SEAI) and the UK Department for Environment, Food, and Rural Affairs (DEFRA) are imposing stricter limits on emissions.  Ecodesign is the European Union’s program for lowering emissions across Europe; it is due to be implemented in 2022 for wood burning and multi-fuel stoves.  The new emission limits will be even lower than those already in place for smoke controlled areas, by 55-88%.  While these regulations have to include multi-fuel stoves, they are primarily focused on wood burning only.  Coal and other forms of fuel are short term solutions to a long term dilemma.  They are already beginning to be phased out due to inefficiency and pollution.

All stoves fall on an energy efficiency scale from A to G.  All showrooms and brochures have to display a stoves energy rating on a graph (similar to the one pictured below).  There are already many stoves on the market that meet Ecodesign’s standards, ranking A to A+ on the efficiency scale.  They would be wood burning only to achieve this score and truly be prepared for the future.

A new stove is a big purchase.  Some people might be tempted to buy a less efficient stove in an attempt to save a few pound, but big purchases can end up being big investments in the long run.  If you buy cheap there is a high chance you will have to buy twice.  There will always be a cost to running a stove, whether its wood, gas, or electric.  Wood is a carbon neutral fuel because, as a tree, it absorbs the same amount of carbon dioxide that is emitted when it is burned as a dry (moisture content <20%) log, proving wood to be the best fuel for your new stove.  To truly maximize your investment, we at Henley would advise you to go with the most energy efficient option as opposed to what may seem the most cost efficient at the time. 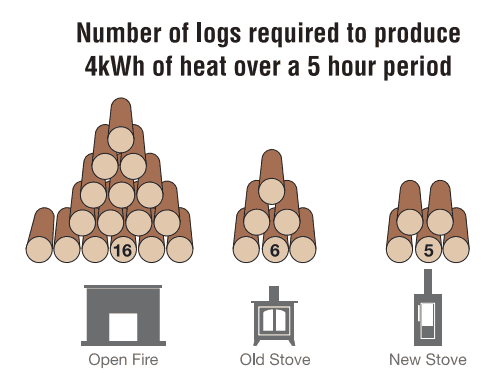 The Dalewood is also available in threes sizes, just like the Hazelwood pictured above.

As we certify more of our Ecodesign stoves, like the Muckross, Castlecove, Cedarwood and more, we will continue to update and educate you on Ecodesign stoves.  The environment is a very up and coming topic, and more and more important as we move on.  Henley is commited to providing the best stoves and knowledge for our customers.

About the Author: Henley Stoves

Founded in County Kerry, Henley Stoves is Ireland’s leading stove company with distribution centres in Dublin, Tralee and Cambridge UK. With nearly 30 years of extensive background in stove industry, the core aim at Henley is to provide a genuine quality product at affordable prices, coupled with best in class customer service.

Compare Products
Clear All Compare Now
We use commonly used web technology (cookies) to track how you use the site so we can keep improving it: Find out more